The store will not work correctly in the case when cookies are disabled.
Meni
SKU
HI88703-02

The HI88703 is a high accuracy (±2% of reading plus 0.02 NTU) Turbidity Benchtop Meter. The meter is supplied complete with AMCO-AEPA-1 primary turbidity standards used for calibration and performance verification. The HI88703 meets and exceeds the requirements of EPA Method 180.1 and Standard Methods for the Examination of Water and Wastewater 2130 B for turbidity measurements.

Skip to the end of the images gallery 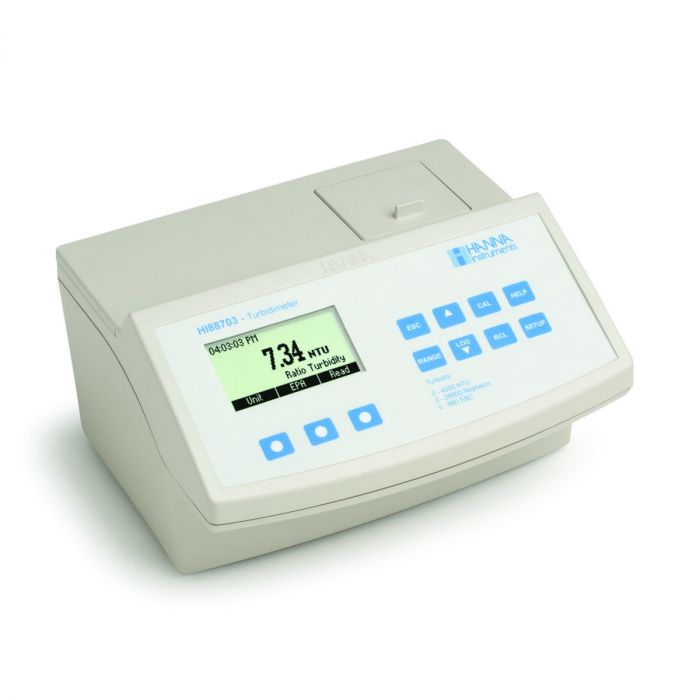 Skip to the beginning of the images gallery
Opis

The HI88703 Precision Turbidity Benchtop Meter is specially designed for water quality measurements, providing reliable and accurate readings, especially in the low turbidity range. The instrument is based on a state-of-the-art optical system which guarantees accurate results, assures long term stability, and minimizes stray light and color interferences. Periodic calibration with the supplied standards compensates for any variations in intensity of the tungsten lamp. The 25 mm round cuvettes composed of special optical glass guarantee the repeatability of turbidity measurements.

EPA Compliant - The HI88703 meets and exceeds the requirements of EPA and Standard Methods for turbidity measurements. When the meter is in EPA mode all turbidity readings are rounded accordingly to meet reporting requirements.

AMCO AEPA-1 Primary Turbidity Standard - The AMCO AEPA-1 supplied standards are recognized as a primary standard by the USEPA. These non-toxic standards are made of styrene divinylbenzene polymer spheres that are uniform in size and density. The standards are reusable and stable with a long shelf life.

Data Logging - Up to 200 measurements can be stored in the internal memory and recalled at any time.

Data Transfer - For further storage or analysis options, logged data can be downloaded to a Windows compatible PC using the USB port and the HI92000 software.

Tutorial Mode - The unique tutorial mode provides additional information to help the user during measurements. When enabled, the instrument displays explanations and a confirmation button when a preparation or other operation has to be performed.

Contextual Help - Contextual help is always available through a dedicated HELP button. Clear tutorial messages and directions are available on-screen to quickly and easily guide users through setup and calibration. The help information displayed is relative to the setting/option being viewed.

Backlit Graphic LCD Display - A graphic LCD display provides an easy to understand, user-friendly interface. All messages are in plain text making them easy to read.

Turbidity is one of the most important parameters used to determine the quality of drinking water. Once considered as a mostly aesthetic characteristic of drinking water, significant evidence exists that controlling turbidity is a competent safeguard against pathogens. In natural water, turbidity measurements are taken to gauge general water quality and its compatibility in applications involving aquatic organisms. The monitoring and treatment or wastewater was once solely based on the control of turbidity. Currently, the measurement of turbidity at the end of the wastewater treatment process is necessary to verify that the values are within regulatory standards.

Turbidity of water is an optical property that causes light to be scattered and absorbed, rather than transmitted. The scattering of light that passes through a liquid is primarily caused by the suspended solids present. The higher the turbidity, the greater the amount of scattered light. Even a very pure liquid will scatter light to a certain degree, as no solution will have zero turbidity.

Drinking water treatment plants that obtain water from surface water are required by the EPA to monitor and report the turbidity. Surface water sources include lakes and rivers. The requirements of the nephelometer and reporting measurements according to EPA Method 180.1 are:

The HI88703 meets and exceeds the meter criteria specified by the EPA Method 180.1 and Standard Methods for the Examination of Water and Wastewater 2130 B.

The light beam that passes through the sample is scattered in all directions. The intensity and pattern of the scattered light is affected by many variables, such as wavelength of the incident light, particle size and shape, refractive index, and color. The optical system of the HI88703 includes a tungsten filament lamp, a scattered light detector (90°) and a transmitted light detector (180°).

In the ratio turbidimeter range, the microprocessor of the instrument calculates the NTU value from the signals that reach the two detectors by using an effective algorithm that corrects and compensates for interferences of color. The optical system and measuring technique also compensate for fluctuations in lamp intensity, minimizing the need for frequent calibration.

In the non-ratio turbidimeter range, the NTU value is calculated from the signal on the scattered light detector (90°). This method offers a high linearity on the low range but is more sensitive to lamp intensity fluctuations. The lower detection limit of a turbidimeter is determined by stray light that is detected by the sensors but not caused by light scattering from suspended particles. The optical system of the HI88703 is designed to have very low stray light, providing highly accurate results for low turbidity samples. 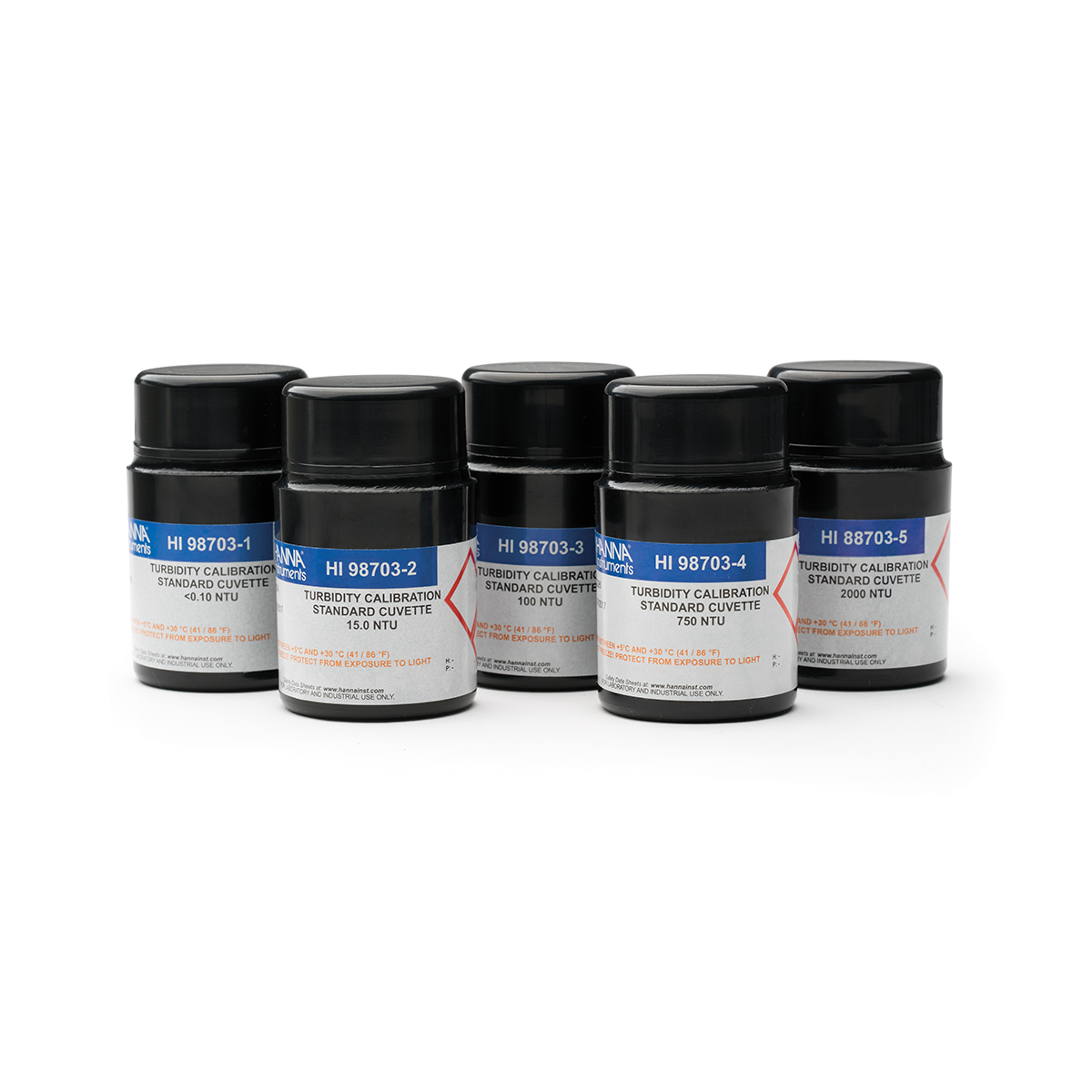 The HI88703-11 AMCO AEPA-1 standards ensure that measurements are traceable to a primary reference materials. These standards are used for calibration and performance verification of the turbidity meter.

Supplied with Certificate of Analysis: